The Energy Plot node plots the eigenstates and associated eigenvalues, the potential function, probability density, real and imaginary parts of a wave function, as well as the expectation value of the Hamiltonian (\langle H \rangle⟨H⟩) and its standard deviation. 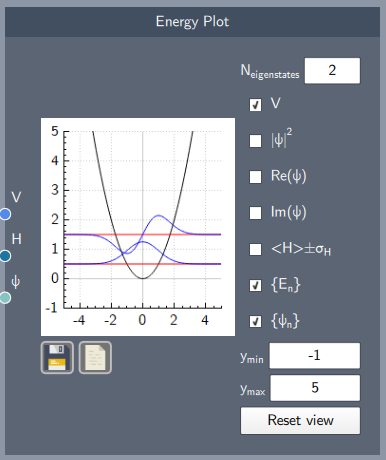 This plot consists of check-boxes corresponding to different functions, which can be selected to visualize them. In the $N_{eigenstates}$ content-field, the desired number of eigenstates and eigenvalues is entered.

The different check-boxes/functions from top to bottom (with required inputs in parenthesis) are:

Additionally, the $y$-axis limits can be set to any limits and reset to the original scale.  The plot can be saved and the data can be exported as a $.csv$ file.

The output of the node is the visualization in the plot based on the inputs and selection of the check-boxes.