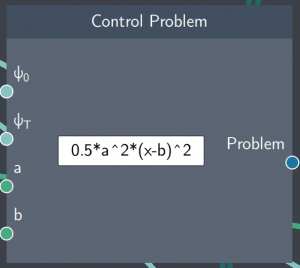 The content field of the node consists of an analytical expression that parameterizes a potential  by a control function.

In the example below, a state transfer problem is simulated where a single particle (trapped in a harmonic oscillator potential) is transported from one location to another. The state transfer between an initial and target state is carried out by controlling the potential. In the Control Problem node, the scalar $a$ refers to the frequency of the potential and $u0$  refers to controlling the potential between the two locations. To look at the details of this along with the flowscene, you can look at the single-particle transport exercise.